• Design could help cut carbon emissions and help meet pledge to become carbon neutral by 2060 • Announcement also means that the reactors, based on a US design, can now be sold abroad 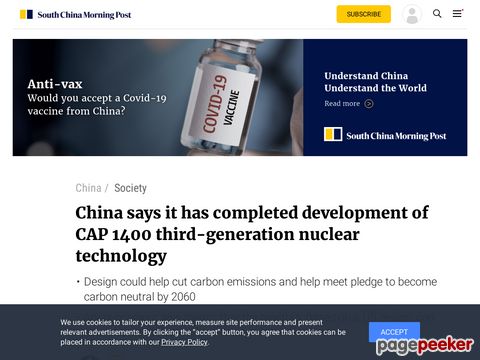 • Design could help cut carbon emissions and help meet pledge to become carbon neutral by 2060 • Announcement also means that the reactors, based on a US design, can now be sold abroad

China has completed the development of a third-generation nuclear technology that could help cut greenhouse gas emissions by millions of tonnes a year, the State Power Investment Corporation announced on Monday.

The announcement that work on the CAP 1400 reactors had finished came days after Chinese President Xi Jinping promised to make the country carbon neutral by 2060.

Analysts said it meant it could now sell the technology, based on a US design, to other countries without getting approval from the American makers of the original. It also marks a shift towards domestically produced technology that has been accelerated by the ongoing tensions with the United States.

CAP 1400 is the second third-generation nuclear technology China has developed, joining the Hualong One reactors based on a French design.

The first two reactors using the CAP 1400 technology are being built at the Shidao Bay Nuclear Power Plant in the eastern province of Shandong, a project that was approved last year.

The CAP 1400 design, or Guohe One, has been under development since 2008, and state broadcaster CCTV said on Monday that scientists on the project had made a series of breakthroughs during this time. As of August this year, 1,052 patents and 6,513 intellectual property applications had been registered in connection with the technology.

The report said the reactors were designed to last 60 years and the risk of serious accidents was 100 times lower than with second-generation technology.

The report said one CAP 1400 reactor could meet the average annual energy demands of more than 22 million residents and cut greenhouse gas emissions by more than 9 million tonnes.

Work on the project was delayed after China put its nuclear power programme on hold following the 2011 Fukushima accident in Japan, but it has stepped up its reactor-building programme in recent years.

At present the country has 47 reactors in operation, capable of generating 45.5 gigawatts, with 15 units that will increase that capacity by 13.8GW under development, according to this year’s World Nuclear Industry Status Report.

But nuclear power still makes up only 4.9 per cent of all electricity generated in China, where coal is still the main source of power.

China acquired a large amount of the AP 1000 technology – which uses pressurised water reactors and provides the basis for CAP 1400 – from Westinghouse.

But the contract banned it from selling its version overseas until it was capable of generating more than 1,350 megawatts, said Wang Yingsu, secretary general of the nuclear power branch of the China Electric Power Promotion Council.

According to Wang, CAP 1400 reactors can now generate around 1,500MW of electricity.

“Under the current geopolitical atmosphere, it is necessary for China to tout its domestically designed technology,” he continued.

It also follows Xi’s pledge to start reducing carbon emissions by 2030 and for the country to become carbon neutral by 2060.

Observers sai the announcement would lead to a boom for the nuclear power industry, with Wang describing it as a “good opportunity” for the industry.

But he said China was still cautious about developing the sector and safety was a primary concern.

Lin said developing the nuclear sector would be key to meeting the 2060 carbon neutral pledge, adding: “Nuclear power won’t completely replace coal but it can be used as the source of baseload electricity to gradually phase out coal.”