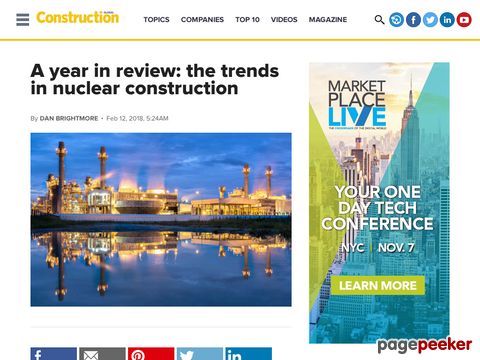 Source : A year in review: the trends in nuclear construction http://www.constructionglobal.com/infrastructure/year-review-trends-nuclear-construction

We look back on a mixed year for construction in the nuclear industry with the delivery of further nuclear power plants (NPPs) under threat from both the rise in renewable energy and the global trend for decommissioning in the prolonged aftermath of 2011’s Fukushima disaster.

According to the latest findings of the annual World Nuclear Report, as of January 2018, there are 52 reactors currently under construction worldwide. Four NPPs began the long-term process of construction in 2017 – one each in Bangladesh, China, India and South Korea.

The Chinese project, a pilot fast reactor, was launched on Christmas Day last year at the Xiapu site in Fujian province, but there were no other new NPP projects or construction starts announced in the country. Analysts suggest it’s a sign of a major shift or slowdown in Chinese nuclear policy, following the country’s domination of world nuclear construction for the past decade when it contributed over 60% of all new global sites since 2008.

The sector is experiencing profound structural change. The introduction of renewable energy at scale, thanks to declining costs driven by technological advances, has increased renewable power output at the expense of conventional technologies such as coal and nuclear. Though an operating NPP can provide up to nine times more electricity per installed kilowatt than a photovoltaic plant, the challenge to the industry from renewables is tangible. China’s massive rates of solar capacity deliver over 50GW to its grid. Even when taking into account lower productivity per installed GW from solar, research shows new solar plants in China alone in 2017 will generate significantly more power than all nuclear reactors started up (four) in the same year in the entire world.

Construction delays are common due to a number of factors, including political upheaval (the US embargo caused a 15-year delay to Iran’s first NPP in Bushehr before construction resumed in 1995) and the type of prolonged protest experienced during the delivery of India’s largest NPP. The progress of the Kundankulam NPP (KNPP) was besieged by various activist groups over potential radiation threats and issues related to nuclear waste disposal, with the anti-Kudankulam campaign intensifying following the Fukushima nuclear incident in Japan in 2011.

Decommissioning is also a factor in construction slowdown. Globally, three reactors were permanently closed in 2017. In Germany, Gundremmingen-B was closed in December as part of the country’s nuclear phase-out policy. South Korea and Sweden both shut down their oldest units - Kori-1 and Oskashamn-1. In addition, two more Japanese reactors, Ohi-1 and -2 were officially closed after the operator abandoned plans for restart and lifetime extension.

The past 20 years has seen the industry place more emphasis on sustainability and focus on the potential for extending the operating life of NPPs. It’s often more economical than building a new one, and why many plant operators, particularly in the US, are seeking licence renewals. “It is very important for us as a world community to care how electricity is produced,” reckons Maria Korsnick, President and CEO of the Nuclear Energy Institute (NEI), who offers hope for NPP construction specialists nervous about the rise of renewables. “You can produce electricity of an intermittent nature, like wind and solar, but you are going to also need 24/7 baseload energy supply that is still kind to the environment, and nuclear is just that.”

Utilising guidance from the International Atomic Energy Agency (IAEA - the world’s central intergovernmental forum for scientific and technical co-operation in the nuclear field) the US Nuclear Regulatory Commission (NRC) issues licences for NPPs to operate for up to 40 years with subsequent renewals of up to 20 years. Following a round of previous renewals, around 90% of American plants will soon reach the end of their 60-year term, prompting the NRC to look at the way it handles regulation when reviewing a NPP’s system metals, welds and piping, concrete, electrical cables and reactor pressure vessels. It must also evaluate potential impact on the environment, so speedier processes have been called for. “In the beginning, an NRC review took years to complete,” recalls Korsnick. “Now that the process is better understood, we are just under two years. For subsequent licence renewal, we will probably get the process down to 18 months.”

Small Modular Reactors (SMRs) and other kinds of so-called ‘advanced reactors’ continue to be positioned as a solution to the problems confronting nuclear power and the still costly renewal requirements of monolithic reactors. SMRs are nuclear power reactors with an electrical output below 300MWe and distinguishable from large reactors by modular design, with prefabrication in offsite factories and the potential for multiple reactors to be deployed at the same site to create bigger power plants. Proponents claim they will be faster, cheaper and less risky to build while safer to operate than large nuclear plants.

NuScale has claimed that “once approved, global demand for SMR plants will create thousands of jobs during manufacturing, construction and operation” and “re-­establish US global leadership in nuclear technology, paving the way for NRC approval and subsequent deployment of other advanced nuclear technologies”. It predicts “about 5,5­75GWe of global electricity will come from SMRs by 2035, equivalent to over 1,000 NuScale Power Modules”.

However, Danny Roderick, former president and CEO of (now bankrupt nuclear services market leader) Westinghouse, once countered: “The problem I have with SMRs is not the technology, it’s not the deployment – it’s that there’s no customers... The worst thing to do is get ahead of the market.” Currently there are no operational NPPs in the world that can be considered fully-fledged SMRs. Several countries and companies are at different stages in the development of SMR technologies. NuScale is the frontrunner to deliver a SMR in Idaho with the initial operational date of 2024. Meanwhile, mPower (another previous beneficiary of Department of Energy funding to the tune of $80m per year) has been struggling to advance a similar project mooted in Tennessee which was terminated in March last year. Elsewhere, South Korea’s System-Integrated Modular Advanced Reactor (SMART) is the first land based SMR to receive regulatory approval anywhere in the world. However, SMR’s are often found to be too expensive on a per-unit generating-capacity basis which has led to this project being shelved. The words of incoming South Korean premier President Moon echo the sentiments of many world leaders now exploring other forms of energy creation: “We will scrap the nuclear-centred policies and move toward a nuclear-free era. We will eliminate all plans to build new nuclear plants.”

Sam Friggens is an energy economist with engineering and development consultancy Mott MacDonald, experts in the nuclear sector. He suggests that emerging innovations in renewables, power storage, efficiency and smart technologies, driven by fast manufacturing cycles, are yielding rapid cost reductions and improving performance, which means that by the time SMRs are ready for mass deployment in the 2030s the market may have disappeared.

He adds: “Will SMRs be acceptable to the public? The closest-to-market SMR technologies produce the same waste as current large reactors and will need refuelling every few years. New sites closer to demand may be attractive from an energy system perspective, but perhaps not to residents of the cities in question. Overall the challenges associated with SMR deployment are likely to be of similar magnitude to those faced by carbon capture and storage. At the same time, recent work suggests that if these challenges can be overcome then smaller, flexible nuclear technologies could still play an important role in future energy systems in countries like the UK.” In any case, it appears SMR construction projects would need the support of major government funding to play a role in tomorrow’s electricity generating business.

These are uncertain times for the industry which saw Westinghouse suffer a spectacular fall from grace in 2017. Its owner Toshiba recently agreed to sell off the US nuclear business for $4.6bn. The Japanese conglomerate made the decision after heavy delays to two Westinghouse nuclear projects drove the troubled engineering group to file. On top of the economic fallout and challenging ageing issues, nuclear operators are struggling with low electricity prices and the consistently dropping costs of their main competitors, wind and solar in particular. In countries like the United States, many nuclear power plants have continued to operate only because of massive subsidies. Despite this, the World Nuclear Association notes that, thanks to the planet’s voracious appetite for power, 160 power reactors (with a total gross capacity of some 160,000MWe) are on order or planned, and over 300 more are proposed.